Kevin Hunter is the author of dozens of beloved metaphysical spiritually based philosophical books that have attracted in loyal readers from all walks of life and all corners of the globe.    As a self-proclaimed beach bum, he is a Southern California native that has resided in beach towns for more than half his life.

Kevin is a metaphysical author and teacher with highly tuned in psychic mediumship perception which he lays out in his book Stay Centered Psychic Warrior.  His books reach Universal audiences with varying belief systems and values.  No matter your religion, political affiliation, sexual orientation, race, gender, and so on – all are welcome and seen as equal in the eyes of God.

Having endured more lifetimes in one has enabled Kevin to rise to the task of being a spiritual catalyst.  He grew up in a violent household suffering immeasurable abuse that propelled him into a sea of addictions from drugs, pills, sex to alcohol.  As a sufferer of social anxiety, D.I.D., and ADD, he found strength in his life quest through the power of prayer and his unwavering connections with God and his Spirit team.  Now he teaches others how to gain a stronger Divine connection and to improve their lives one person at a time.

Kevin has always had the uncanny ability to effortlessly obtain a focused clear psychic connection with his Spirit team in Heaven since childhood.  As a result, he has been hailed to be a strong forceful wise one that is supremely direct in his delivery.  His divinely guided books enlighten, entertain, educate and empower.   In person, others have described him as reserved and strong, yet funny, witty, and wise.

Much of his written works are in the metaphysical, spiritual, parapsychological and philosophical genres catering to diverse audiences with varying belief systems and values.   This is from church officials to popular entertainment stars that have read something of his and commented on how it positively impacted them.  He’s received positive praising notes from teachers to students, from conservatives to liberals, to gays to straights, to agnostics to religious people.  Men have thanked him for infusing yang energy into a genre that had typically been void of it.   His work reaches all people due to the content being vibrantly inclusive.

Kevin started his professional life working in the entertainment business.  Weeks after his 23rd birthday, he was asked to join one of Hollywood’s most respected actors, Michelle Pfeiffer at her former production company Via Rosa Productions.  The sharp, film-literate worked as her development assistant dude.  One of his roles was to read and write coverage on script submissions for Pfeiffer to potentially star in and/or produce.  This included searching for and focusing on strong female driven characters-no victims!  He took the no-victims phrase request to heart and ended up rising and transforming into a tough warrior presence refusing to be a victim.

The boutique company was in a popular beach town run by three strong women in their thirties at the time that included actress Michelle Pfeiffer, her producing partner and best friend Kate Guinzburg, and development director Mary Kohnert.  The ultra-private women agreed to take a risk and bring in a new element into their private enclave for the first time after six years since their conception.  They chose an equally strong being, but this one in the form of a young rebellious, but intelligent male force to balance out the yin-feminine energy.  Guinzburg once described him to a Film Production Manager, “He’s a sharp young man.”  Kevin worked through the company’s development and film productions of One Fine Day, A Thousand Acres, and The Deep End of the Ocean.

After several years, Pfeiffer dissolved her company, and Kevin made an immediate move into coordinating Film Productions for some of the major Hollywood studios including Warner Bros., 20th Century Fox, and Sony Pictures.  With a strong work ethic, he continued to hammer his name into stone in the film industry working with some highly notable talent, producers, and directors while adding to a mounting list of production credits.

Some of his other film work credits include the Antonio Banderas directorial debut of, Crazy in Alabama, Via Rosa’s Original Sin with Angelina Jolie and Antonio Banderas, The Perfect Storm with George Clooney and Mark Wahlberg, Harry Potter and the Sorcerer’s Stone, and Dr. Dolittle 2 with Eddie Murphy. He then reunited with Pfeiffer’s former producing partner Kate Guinzburg, at her former company she formed with veteran Producer Martin Bregman (Scarface, Serpico), who also managed Al Pacino.  In that role, Kevin associate produced the Julia Stiles and Shirley MacLaine film Carolina, where he played an integral part in bringing the project through development and production.

After ten years of working on back to back films and being at the top of his game and in demand by Entertainment Industry talent, Kevin made the shocking move of wanting to back away.   He started to turn film projects down in order to take the risk and leap of beginning the process of transitioning into his life purpose work as an author.   He ended up turning down a great deal of film offers such as all Harry Potter films, Superman, Spiderman, Tim Burton’s Planet of the Apes and Big Fish.  Instead, he wrote essays, studies, and columns about human psychology and the human condition, along with topics on love, dating, relationships, and sex before erupting and emerging into one of the spiritual world’s deepest metaphysical teachers, preachers, philosophers and authors around.

His spiritually based empowerment and inspirational books include Warrior of Light, Stay Centered Psychic Warrior, Empowering Spirit Wisdom, Darkness of Ego, Realm of the Wise One, Transcending Utopia, The Metaphysical Divine Wisdom series (6 books), Stepping Into My Divine Masculine King Power, Reaching for the Warrior Within, Living for the Weekend, Ignite Your Inner Life Force, Tarot Card Meanings, Love Party of One, and Awaken Your Creative Spirit.

His earlier works include the horror, thriller, drama Paint the Silence, and the modern-day trashy beach love story with two male leads in Jagger’s Revolution.  His books tend to have a strong male protagonist.

The best selling author of dozens of books
in the areas of metaphysical, philosophical,
inspirational, spiritual and enlightenment
for your soul’s evolving journey. 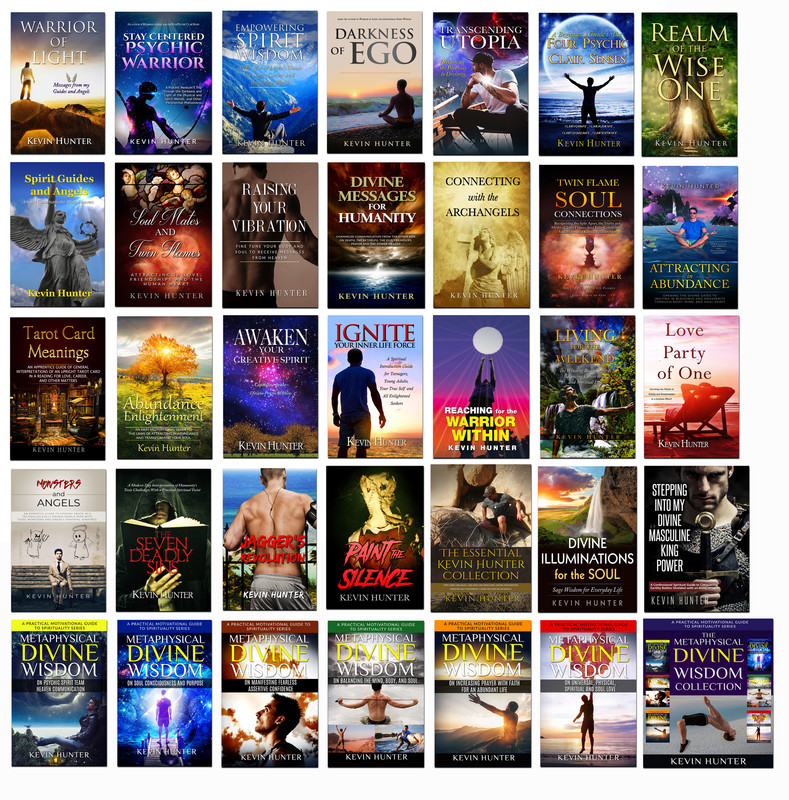